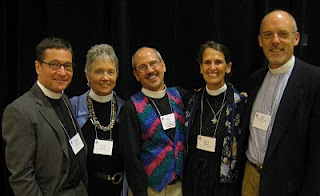 The Standing Commission on Liturgy and Music of The Episcopal Church is preparing to move the Episcopal Church toward installing same sex marriage rites in the church. You can read their documents here. The major funding for this effort is coming from the Arcus Foundation, well-known as a political lobbying organization that is funding major initiatives in religious organizations that focus on our work on LGBT (lesbian, gay, bisexual and transgender) issues. In the case of the Episcopal Church, they are funding the work to radically alter the understanding of Christian marriage in the currently official branch of the Anglican Communion in the United States.

This work is a follow-up to Resolution C056 Liturgies for Blessings of Same-Gender Relationships (which, following the Arcus Foundation's goals would also include bisexual and transgendered marriages as well). The text for Resolution C056 is as follows:


Resolved, That the Standing Commission on Liturgy and Music, in
consultation with the House of Bishops, collect and develop
theological and liturgical resources, and report to the 77th
General Convention [in 2012]

Resolved, That the Standing Commission on Liturgy and Music, in
consultation with the House of Bishops, devise an open
process for the conduct of its work inviting participation from
provinces, dioceses, congregations, and individuals who are
engaged in such theological work, and inviting theological
reflection from throughout the Anglican Communion

SF did some background research on Arcus last year where it found that in 2008, Arcus distributed 19 grants totalling $2,128,331 to further its goals for same-gendered issues. Of that amount, over half a million dollars funded Integrity (TEC), the Chicago Consultation (TEC), and Lutherans Concerned (ELCA).

What is interesting to note is that the funding is coming from an outside secular and political source for social action and has not yet received substantial funding from local dioceses and churches. The primary connection to the Arcus Foundation's funding has been the progressive Church Divinity School of the Pacific (CDSP) at the University of California, Berkeley, where Presiding Bishop Katharine Jefferts Schori went to seminary.

The Standing Committee on Liturgy and Music will develop these materials as an addition to the
Enriching Our Worship series, the official Episcopal Church supplement to the Book of
Common Prayer.  The use of the materials must be authorized by the action of General Convention.  The SCLM plans to propose that the new rites be included in a revised edition of Enriching Our Worship which will be brought before the next General Convention in 2012.

You can read the work of the ECLM here.  You can read more about Arcus here and here.  You can read more about the CDSP here and at their blog here which also has a link to this enthusiastic report at Susan Russell's blog about the ECLM task force presentation at the recent House of Bishops meeting.  One of the things that is interesting to note is that Susan Russell has stepped down from leadership of Integrity, signaling that the need for outside organizations such as Integrity are no longer needed since the goals of Integrity are now officially embraced by the national office of The Episcopal Church.
Posted by Unknown at 11:18 AM

Hmmph. TEC shows Bennison out the front door and lets this group in the back. Good example of Jesus' teaching that when a newly-swept room is left empty and not filled with God's Truth and Holy Spirit, the subsequent defilement by evil will be seven times worse.

One small correction (amongst several possible).

As I understand it, Susan Russell has stepped down from the leadership of Integrity because she had completed her term in office and there was another person of talent ready to take over.

I gather that Integrity isn't going anywhere and the national office of TEC hasn't (in any final way) embraced anything of that sort.

It is my understanding that TEC has agreed that a generous pastoral response is needed for this particular community, many of whom are un-churched and in great need of hearing the word of God.

The last GC also agreed that they would study and consider what form an appropriate rite such a pastoral response might take. If I know anything about TEC, studying and considering is likely to be a good while yet....

The way I read the commission's charge, they are to come up with a version of what a rite might look like; that proposal would be then debated, amended, approved, or rejected by the church in GC.

IMHO - The most likely outcome, given we are talking about TEC here, is more study.

It certainly can't be a surprise that they are willing to discuss such a possibility at some point in the distant future. After all, they've been discussing the possibility of discussing it for DECADES.

BTW - I note that the gay community is only ONE of many otherwise excluded, despised, and un-churched communities with whom TEC is beginning (VERY slowly) to recognize a pastoral need and evangelical opportunity.

You are partially right. The need for an organization like Integrity is not the same as it was 20 years ago.

There was a time (about 25 years ago) in my diocese that the local Integrity chapter was "church" for many gay men. They were not welcome in most congregations, so Integrity served in this capacity. The weekly Integrity Mass was the only thing available to the gay community.

Today, those same people who only had contact with the church through the local Integrity chapter are active in parish life. There is no need for Integrity Eucharist services any longer as those who used to attend are now welcomed in any local parish in the diocese.

@D and J - I suppose that may be true. As such, one suspects the organization will (is?) wither(ing) away. But it hasn't folded yet and seems to be going strong for the moment.

With thanks to the colleague who pointed me to this post, in point of fact "Susan Russell stepped down" because her two three-year terms as president were over and David Norgard was elected as the new Integrity President in 2009. Integrity just hired a fabulous new Executive Director and moving ahead with plans and programs into this triennium. It was an honor to be asked to present the work of the SCLM to the House of Bishops (that's S + CLM, not E + CLM ... another editorial note) and we're looking forward to the process of collecting and developing resources as called for by General Convention and for their adoption for trial use in 2012. For more info on Integrity's work their website is http://www.integrityusa.org.

Anonymous said...
This comment has been removed by a blog administrator.
11:55 PM

Alas, Anon - Hagrid has tossed you out the door. He sure is staying busy these days. What's up with that?