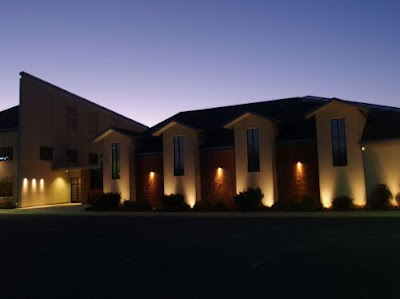 LIVE from the Annual Council for the Convocation of Anglicans in North America (CANA).  We're back in Herndon, Virginia this year at Church of the Epiphany for the gathering of churches that are affiliated with CANA, now enjoying dual citizenship in both the Anglican Church in North American (ACNA) and the Church of Nigeria Anglican Communion.  The new primate of all Nigeria - the largest province in the Anglican Communion - Nicholas Okoh is here and Archbishop Bob Duncan of the ACNA will also be here.

Another resolution gives thanks for "Anglican 1000," a vision to plan 1,000 new Anglican Churches across North America in the next five years and gives thanks to God for the vision and leadership of Archbishop Bob Duncan and Canon David Roseberry, who chairs the 1000 Steering Committee.  "This Council expresses its full support for the ministry of Anglican 1000 and encourages the congregations and clergy under CANA's jurisdiction to pray and plan for their own participation in this exciting work of God," the resolution reads.

In addition there are workshops on "What Christianity Becomes a Mile Wide and an Inch Deep," "Key Legal & HR Policies for Congregations 101," "ESL and Cross-cultural Evangelism 101," "80% of Christian Teens Become Unchurched," "Dr. Seuss' Lessons About Life and Unemployment," and "Anglican Action."

And that's just for Thursday.  More workshops are offered tomorrow! 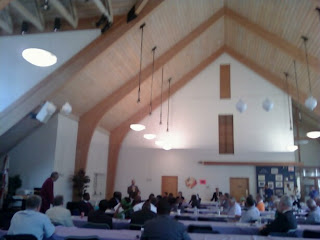 AFTERNOON UPDATE: Blogging live from the session on Dual Citizenship.  Bishop Minns and the Primate of All Nigeria,  Archbishop Nicholas Okoh, are making the presentations.  The Bible does not know about the "Lone Ranger Christian" which is more of a mark of our post-modern world, Bishop Minns tells the CANA delegates and clergy assembled.

Among those here in the room are the deans of both Trinity School for Ministry and Nashotah House who are listening intently as well.

Bishop Minns is now giving a short history on how CANA was founded.  Nigeria is not interested in setting up a beachhead in the North America but to provide a covering for orthodox Anglicans in this country.  The challenge was for Anglicans not to fragment but remain together and over time. Reluctantly the Church of Nigeria recognized that a new province should be established and was the first province to recognize the ACNA.

The ACNA is not officially recognized by the Archbishop of Canterbury and the ACC, it is recognized by nearly half of the provinces in the Anglican Communion.

Is it possible for people to be fully engaged in the United STates and yet maintain a canonical connection to the Church of Nigeria during this transition?  Yes, it is possible to keep that dual citizenship, Bishop Minns said.  He gives as his illustration that he carries two passports - the passport of the country of his birth, England, and several years ago he became an American citizen and carries an American passport.  Bishop Minns is in both the House of Bishops of Nigeria and the College of Bishops in the ACNA.

"Walk patiently, eventually we will arrive," says Archbishop Okoh regarding recognition of the ACNA by the Archbishop of Canterbury.

Dual citizenship? A novel idea and one that cannot last long, IMV. Sooner or later people will have to choose.

Well, Bishop Minns explained it in that he has American and British passports.

But he also explained that it is a temporary structure and that as dioceses are formed to join directly with the ACNA more parishes will be joining ACNA directly.

It is a missionary diocese that serves the people within it, a lifeboat in very troubled waters.

My view has long been that CANA was a construct whose primary, if not sole purpose was to support the legal position that departing parishioners in Virginia had moved to another "branch" of a "church", the latter being defined as the Anglican Communion, thus packing the effort to lay claim to property within the words of a very unusual Civil War era state statute. Now that that purpose has proved unsuccessful, the distinction between CANA and ACNA makes little sense, and there will be an effort to combine the two as gracefully as possible without doing harm to continuing elements of the legal issues. I do not sense that there is any doctrinal or structural impediment to the two groups moving together as quickly as they can as long as it is not done so cavalierly as to completely denude the pretense of the original structure.

By the way, the pictures of the church are impressive. I hope the Diocese of Virginia got a fair rental rate for its use.

Scout, your first paragraph of speaking your opinion is fair even if it is a contrary view, it's fair. The second paragraph is not so helpful. The property is in litigation as we all know.

It merely expresses my hope, BB. I'm sure that part of the litigation will be to true up all these usage issues and charges for the past few years if it is found that the deeds and records establish ownership in the Diocese or the national Church. And if, as I hope, there is a settlement, that puts an end to this wasteful property conflict, the settlement will no doubt take care of allocating costs between the sides.

BTW, unrelated to anything else - but I don't know where else to put it - I see you are listening to Robin Marks's version of Guide Me Now Oh Great Jehovah. If you want to hear an excellent version of this, Christopher Parkening, the classical guitarist, has a cut that I think you would like.

Before you waste time trying to find that by the name of the hymn, I think Parkening recorded it under "God of Hope and God of Glory" which, if memory serves, is the Harry Emerson Fosdick lyric.

I also find it interesting that the litigation in Virginia is governed by a statute modeled on the Methodist's plan for dealing with division over the issue of slavery. My guess - and hope - is that it will be judged as a violation of the free exercise of religion provisions in the US Constitution.

I think, Father Weir, that the disposition that the Supreme Court of Virginia reached makes certain that there will not be a resolution of the constitutionality of the statute, at least not in the context of the current spate of departures. If the pending reconsideration petitions are granted, then the Court will have to deal with the constitutional issues. That they'd rather not reach those issues if there is an alternate basis on which to decide the case makes me think that, even though it only takes one vote to grant reconsideration, the Court will reject the CANA petitions.

Ultimately, I guess that is a possibility, Father. But I think it would only occur if there is some interpretation of the deeds and instruments of title that appears to import reasoning from the Division Statute, and that decision goes up to the state supreme court and is upheld. In other words, it would take an adverse decision to the Episcopal groups at this point to uncover the constitutional issues. Or, alternatively, I suppose subsequently seceding parishes might try to color within the lines suggested by the Supreme Court, constructing a different "branch" argument, and that might find its way all the way up. But none of this can happen in the near term.

My understanding from the beginning, is that CANA was to be a "Tabernacle" of sorts; a place where folk would find a safe place to worship, live, and serve until the current crisis was resolved. Based on all reports at this Council meeting, these faithful Anglicans are thriving as the convocation has experienced geometric growth in four short years.

I don't pretend to be a prophet, but I suspect that we'll continue to witness growth like this in CANA (litigation not withstanding) over the next several years, until its ultimate assimilation into the greater ACNA.

"Fear not little flock" may stand as a prophetic word in the face of claims that this century is the Anglican Century. How strange that we in North America are so beguiled by dreams of greatness.

I think the call and hope of an Anglican Century lies not in the quest for edifices and endowments. I believe it is a call to loose the Anglican expression of the faith out into a parched post-modern landscape, and fields that re ripe unto harvest.

I hope that you are right that in this century the Anglican expression of faith - in all its variety - will serve God's purposes. I recall that the publishers of The Christian Century became somewhat embarrassed by the triumphalist tone of that title, but they decided against changing it. I think we all need to guard against triumphalism.