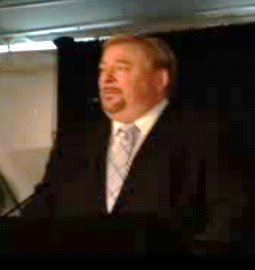 Here we are in Ft. Worth on Day Two of the ACNA Provincial Assembly. Rick Warren is fixing to make his address starting at 10:30 a.m. which will be broadcast live from the "Marquee." The Marquee is a Big White Tent (as opposed to the Big Top of the Lambeth Conference) set up in the parking lot of the Diocese of Ft. Worth's St. Vincent's Cathedral for the overflowing crowds.

Spent the morning driving around the freeways of Ft. Worth with Faith of Scary IRD looking for a CVS Store and trying to follow her GPS "Tom-Tom" that sounded more like old friend David Aikman after a long stint in Russia. It took a while for us to figure out what it was saying to us (we've dubbed the Tom-Tom "David" - sorry, David) and ended up doing one loop-d-loop after another until we found yet another part of our team to pick up and head back to St. Vincent's in time for the morning sessions. Did manage drive-thru at McDonald's for coffee and biscuits.

This afternoon the Assembly will tackle the proposed ACNA Canons. It will be interesting to see if the delegates will be as compliant as yesterday. There is much, very much to commend that amount of work that has gone into the drafting of the Constitution and Canons. But one still gets the sense that these delegates are war veterans and just want to get on with it.

That being said, there is still a lot of fascinating offline conversations going on, where delegates, press, and guests are having theological conversations regarding the more detailed aspects of the Anglican tradition of the Christian faith. It's nearly what I might call "religious wonk talk" as we talk about a variety of topics from the finer points of the administration of the episcopate to whether it better to order albs from Whipple rather than Almy. 11:03 a.m. - "You may lose the steeple, but you will not lose the people," says Rick Warren during his address at the ACNA Assembly, reminding the delegates and guests that the work of the church must center on the preaching of the Gospel of Jesus Christ and making disciples.
Posted by Unknown at 10:20 AM