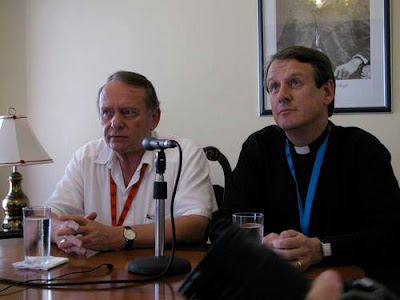 Uh, Question: Kenneth Kearon says that churches - whatever that word means, by the way (no one seems to have a clue right now what the word "church" means, which just adds to the sort to comical subtext that pops up from time to time) who opt-in to the Covenant come under the Covenant as Covenant Churches, but churches that don't opt in - well, nothing happens to them, they just stay in the Communion and carry on as always, while it appears the Anglican Covenant Churches are just seen as one-click members of a Facebook Fan Page.

And the point is - so, what is the point?

"All we like sheep have gone astray; we have turned every one to his own way..."
Isaiah 53:6

Here is the Opening Press Conference with the Secretary General of the Anglican Communion The Rev'd Canon Kenneth Kearon and Chairman of the ACC, Bishop John Patterson of New Zealand:

And Anglican Mainstream's Chris Sugden is on the beat. Here's today's report:

Leaders and representatives from around the Anglican Communion have gathered in Kingston, Jamaica and will spend the next 11 days working to make their Communion a healthier one. The 14th meeting of the Anglican Consultative Council (ACC) occurs in the middle of what's turning out to be a turbulent year for the Communion's 55-million active participants. 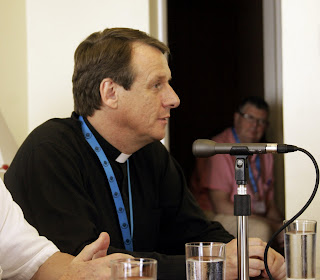 Most of the delegates arrived yesterday and were greeted with a reception that lasted till around 10:00 pm. The Archbishop of Canterbury, Rowan Williams, began this morning by leading the delegates in a quiet time of reflection. Archbishop Williams will also address the delegates at the first plenary session, which is tonight. However, consideration of the main agenda item, the proposed Anglican Covenant, won't begin until Monday.

The 14th meeting of the ACC will consider the Ridley Draft of the Anglican Communion Covenant, and make comments on it, but is not expected to make any alterations to the text. "The text is mature enough to send on to the provinces who will make the decisions," said Secretary General Kenneth Kearon at the opening press conference. Canon Kearon confirmed that the covenant will only be operative for those churches which decide to sign on to it. However, he admitted that ACC-14 will need to decide whether it will be individual dioceses or provinces that will sign up to the Covenant. So it appears that ACC 14 needs to decide whether individual dioceses can sign up to the Covenant even if their province does not.

Bishop John Paterson of Auckland New Zealand, the chair of ACC -14, hoped that the conference would "build on the experience of how people worked together to achieve understanding if not a common mind on everything at Lambeth 2008 and... come to some decisions in the best interests of the Communion." The management of ACC-14 is hoping for a common mind at the conference that will help the delegates make critical decisions. However, it is ironic that the managers of the Lambeth Conference, a three-week Conference designed to make no decisions, will be the same ones overseeing the processes of the 10 day meeting of the ACC. How they make the shift from a process designed not to make decisions to one that does will be interesting to see. It is also interesting that, according to its managers, the ACC can make decisions while we note that Lambeth Bishops were not allowed to.

The conference will also consider the report of the Windsor Continuation Group (WCG). While organizers did not say what the delegates would be considering, Canon Kearon said that the report's view of the three moratoria was that the moratorium on the consent to the consecration of a bishop in a same sex relationship had held, that the moratorium on the public rites of same-sex blessings had held by and large, but that cross-border interventions had not ceased but had gotten worse. It was not expected that the meeting would consider the development of a new Anglican province in North America.

During the press conference, a reporter from The Episcopal Church's news service asked a procedural question about the absence of Archbishop Orombi of Uganda who had been elected to represent Africa on the Joint Standing Committee of the Primates and the ACC but had not "participated in his role." The reporter asked if there was an alternate for that voice. Canon Kearon indicated that on each of the occasions of his absence, Archbishop Orombi had sent his apologies and that there had been good communication with him. Steps had been taken for there to be an alternate but the person chosen, Archbishop Akrofi of West Africa, declined because notice for this current meeting had been too short.

The Secretary General confirmed that the cost of the conference was £330,000 and was fully covered by provision made for it over the last four years, even though it had increased in cost because of the change of the relative values of the United States dollar and the British pound.

The Conference will gather with 10,000 Jamaican Anglicans and the Bishops from the Province of the West Indies at the National Arena tomorrow morning. Many Anglican Churches on the island are closing tomorrow and will be joining the celebration and worship service led by mass choirs and steel-drum bands. The event promises to be a very Caribbean-style event.

The Anglican Journal has also filed a report: 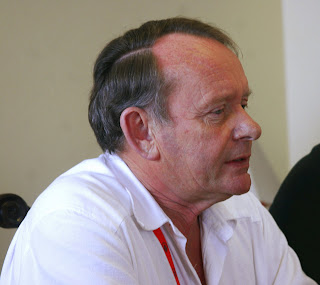 Delegates to the 14th Anglican Consultative Council (ACC) will make the momentous decision at their meeting here on whether to recommend the third (Ridley-Cambridge) draft of the proposed Anglican Covenant for consideration by member churches of the Anglican Communion.

The ACC “is charged with the decision as to whether it (Ridley-Cambridge draft) goes forward at this point and is referred to member churches of the Communion,” said Bishop John Patterson, ACC chair and bishop of Auckland, New Zealand, at a press briefing.

“I think the Covenant Design Group thinks that it has done what it can with the text and feels that it is now mature enough to be handed out to the provinces,” added Canon Kenneth Kearon, secretary general of the Anglican Communion. While it is up to the ACC to make a decision, “the hope is that the ACC will feel that it’s mature enough to go to the provinces,” said Mr. Kearon. “No instrument of the Communion is going to make a decision about the covenant, it’s up to the member churches in the Communion.” The Anglican Communion is composed of 80 million Anglicans in 44 regional and national churches in over 160 countries.

Acceding to the covenant is voluntary, explained Mr. Kearon, adding that the membership in the Communion of churches will not cease or be altered if their decision-making bodies decide not to sign on to it.

“We’re not looking for a substantive majority – the covenant will only ever apply to those churches of the communion which decide (to sign on to it). “

Bishops, clergy and laity in the Anglican Church of Canada – who have commented on the three drafts of the proposed Anglican Covenant – have expressed varying degrees of acceptance and non-acceptance not just of the text but also of the very idea of having a covenant to begin with. The proposal for a covenant was among the key recommendations of the Windsor Report, which saw it as a mechanism for helping resolve the current conflict in the Anglican Communion regarding the issue of homosexuality.

The Canadian church’s Anglican Communion Working Group met by conference call recently to look at the Ridley-Cambridge draft. “I think on the whole, what we’re saying is that right now, it’s probably as good as it can be,” said Suzanne Lawson, the Anglican Church of Canada’s lay delegate to the ACC. “There are several things that we might have wanted to be different, even to the point that some of us could have said, ‘Why do we really need a covenant?’ But, in fact, it looks like we will have a covenant and the real feeling is that the Covenant Design Group has listened hard to the kinds of input that have been presented to them and have done a pretty good job.” Personally, said Ms. Lawson, “I have some concerns that I’m going to talk to people about and that is that the bulk of the responsibility for dealing with ‘problems,’ and I think the Canadian church is considered ‘a problem’ – although we don’t think so – in the hands of the majority of primates, bishops and clergy of the Joint Standing Committee, which is being given increasing power.…” (The deep divisions and debate over the place of gays and lesbians in the church has been triggered by the approval of the blessing of same-sex unions in the Vancouver-based diocese of New Westminster in 2002 and a year later, by the consecration of a gay bishop in The Episcopal Church’s diocese of New Hampshire.)

It would be up to two meetings of General Synod, the Anglican Church of Canada’s governing body, to decide whether or not the church should sign on to the covenant, a process that could take at least six years.

Meanwhile, Bishop Patterson said that the proposal by conservative churches who have left the Anglican Church of Canada and The Episcopal Church for a new North American province is not on the agenda of this meeting. “To my knowledge the matter has not been referred to us, it’s not part of the agenda,” said Bishop Patterson. The ACC would be the appropriate body in the Communion to address the issue of creating a new province.

Mr. Kearon said that the primates, who met last February in Alexandria, Egypt, had also expected the matter to be raised but it wasn’t.

The issue, however, may come up during discussions of the report by the Windsor Continuation Group (WCG), which has commented on the matter. The WCG, which was created by the Archbishop of Canterbury to recommend the way forward for the divided Communion, has identified "some of the difficulties in recognizing the coalition among the provinces of the Communion,” including “the possibility of parallel jurisdictions.”

Bishop Patterson, who has been to seven ACC meetings and has chaired three of them, said he was “full of hope and expectation” for the meeting, adding that “it’s my personal contention that if the ACC meets well, it’s good for the Communion.”

Asked what “meets well” and “good for the Communion” meant, he said: “(Archbishop) Robert Runcie was the first chair of the ACC and he coined the phrase that the Communion is united by ‘bonds of affection.’ And for the first five meetings of the ACC that I was a part of, it was very evident that once people got to know, appreciate, understand and then develop trust, that those bonds of affection are very real,” said Bishop Patterson. “Strains and tensions in the Communion that surfaced in ACC 13 at Nottingham meant that it was not such a good meeting of the ACC. I think a lot of us had to acknowledge that and take some responsibility for it.” He added that the ACC, which includes laity, clergy and bishops, “is the most representative body of the four instruments of communion” and if “they meet well, that’s carried back to the member churches and the communion is strengthened.”

At the last ACC meeting in 2005, representatives of the Canadian and American churches sat on the sidelines after their churches were censured over the issue of sexuality.