Today is the 8th Anniversary of BabyBlueOnline!

Hard to believe it's been eight years since we opened the cafe doors and started serving up the butterbeer and chai.

Here is the origin of the name:


Since today is our anniversary we know what that means! We are celebrating the 8th CafeAnonsBall!  The one time of year when we celebrate all those folks who drop into the cafe and who's name is only known to God.


Shrove Tuesday was once known as a "half-holiday" in England. It started at 11:00 am with the ringing of a church bell. On Pancake Day, "pancake races" are held in villages and towns across the United Kingdom. The tradition is said to have originated when a housewife from Olney was so busy making pancakes that she forgot the time until she heard the church bells ringing for the service. She raced out of the house to church while still carrying her frying pan and pancake. The pancake race remains a relatively common festive tradition in the UK, especially England, even today. Participants with frying pans race through the streets tossing pancakes into the air and catching them in the pan whilst running. 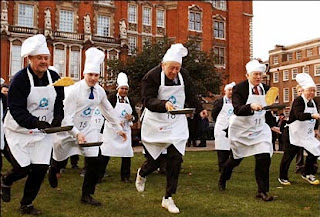 And so on this day, we say thank you - all you anons (who know who you are), thank you for dropping in, toasting your tankard, speaking your mind and most of the time keeping your cool.
Posted by Unknown at 5:50 PM

Congratulations BB,
So much has happened since you opened the doors.
Thank you for helping us remain current and may God continue to bless your cafe.