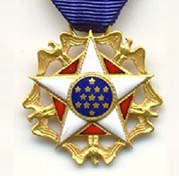 Bob Dylan will be presented with the highest civilian honor awarded by the United States today, the Presidential Medal of Freedom.

President Barack Obama and First Lady Michelle Obama will participate in an event honoring the 13 recipients of the Presidential Medal of Freedom in an East Room ceremony at the White House.

Created by President John F. Kennedy through an Executive Order in 1963, the Medal of Freedom is recognizes exceptional meritorious service.

UPDATE: Here is the section focusing on Dylan:

Here is a list of those receiving the honor today:

Here is the classic recording by Peter, Paul & Mary of Bob Dylan's Blowin' in the Wind.

Quite the eclectic group this year.

Was Dylan tripping out during the ceremony?

Perhaps the bright lights are tough on the guy - or better yet, maybe it's a tribute to Bono. Heh.

Seems very disrespectful of the award, and especially to the other recipients, to not remove his sunglasses. For example, he's too good to glare upon a member of the Polish Underground? Yet another bad decision of this White House administration.

Interesting that someone could make Dylan's sunglasses into a negative commentary on this Administration.