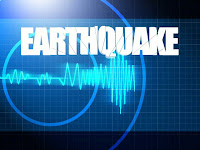 Just doing work at my desk at home when the earthquake hit.  I've been through a minor earthquake in Hawaii and of course the usual tremors in California - but this was like nothing I have been through.  The building was shaking - I am on the top floor and it just kept shaking and shaking as stuff fell all over the place.  Stuff is smashed in my apartment but the building seems okay.  The cat was the smartest one  - she went and burrowed under a sturdy piece of furniture in the interior bathroom.  But she is not speaking to me right now.

I am still shaking - this was amazing.  Have to plug the TV back in - it fell over as well so haven't seen pictures.  I kept saying out loud, "It's okay, I can handle stress!  It's okay!"

Just talked to my sister-in-law who is from San Jose, California but lives nearby me here in Virginia.  She was visiting her eighty year old father at his house in Burke.  Until recently he was a long-time resident of San Jose but now lives here.  When the earthquake ended there was silence and then he turned to his daughter and said rather calmly, "well, that was a bout a 5."

LATER: One of the smashed things was my collector's edition of a Ronald Reagan Jelly Bean Jar.  My George W. Bush Jack-in-the-Box also crashed to floor and W popped out.  But Grandma's China is okay.

The President has already appeared on TV to announce that he inherited the fault from Bush. ;)

Once I realize what it was and that my building was not coming down ... actually ... that was kind of fun.

My big dogs turned into little wimps. One hid in my closet for the next four hours. I thought I was going to have to get one of those extraction teams from the prison shows that MSNBC likes so much to get her out to attend to her necessaries. Finally, the prospect of her canine colleague getting dinner without her was enough to ease her out of hiding.