Dylan is a hit as XM DJ 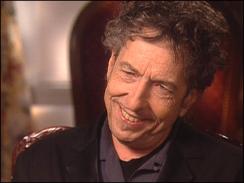 NEW YORK, May 24, 2006--(AP) Coming from the radio speakers, Bob Dylan sounds as craggy and weather-beaten as he looks — and quite playful, too.

The rock 'n' roll poet, who turned 65 on Wednesday, is carving out a new role as a part-time radio disc jockey. His weekly "Theme Time Radio Hour" airs at 10 a.m. EDT Wednesdays on XM Satellite Radio, with Dylan as both curator and narrator. (It's available eight times throughout the week.)

Much like his concerts, Dylan's radio shows are a journey through 20th-century musical Americana, the sort of thing he would have heard growing up in Minnesota with a transistor radio hidden under his pillow when he went to bed.

So far, about the only thing missing is Bob Dylan music, unless you count the off-key verse of "Take Me Out to the Ball Game" that he croaked at the beginning of this week's show on baseball.

Each week Dylan builds his show around a theme, like the weather and drinking songs. For Mother's Day, he celebrated moms with an hour that mixed Buck Owens' "I'll Go to Church With Mama," Ruth Brown's "Mama He Treats Your Daughter Mean" and LL Cool J's "Mama Said Knock You Out."

The majority of the music Dylan plays predates his own rise to fame.

"I think it's more akin to the way radio sounded in 1952 than it does in 2006," said Lee Abrams, XM Satellite Radio's chief creative officer.

He refreshingly avoids the obvious: Dylan spins Billy Bragg and Wilco's "Joe DiMaggio Done it Again" and not Simon & Garfunkel's "Mrs. Robinson" ("where have you gone, Joe DiMaggio ..."). He plays Buddy Johnson's "Did You See Jackie Robinson Hit That Ball" and ignores John Fogerty's overexposed "Centerfield."

"If diamonds are a girl's best friend, why do so many girls get mad when you want to go to the ballpark?" Dylan says during this week's show. "You tell me."

That sort of absurdist humor is what may most surprise listeners. Dylan told mother-in-law jokes a la Henny Youngman during one show ("I just came back from a pleasure trip — took my mother-in-law to the airport"). He discussed — seriously, we think — watching the old country-flavored musical/variety TV series "Hee Haw."

"Here's LL Cool J," he said. "Don't call it a comeback. He's been here for years, rockin' his peers, puttin' 'em in fear, makin' tears rain down like a monsoon, explosions overpowerin' the competition. LL Cool J is towerin'."

And catch this opening to that show on mothers:

Although you can occasionally hear the shuffling of papers as he talks, Dylan sounds like a natural on the radio.

"I was completely surprised" by his radio show, said Jonathan Cott, who edited an anthology of Dylan interviews that was released to coincide with the 65th birthday. "I was surprised when he wrote his `Chronicles' book. I'm surprised by him all the time. I didn't think he'd ever be a disc jockey."

Abrams said Dylan topped his "wish list" of celebrity DJs when he started working for XM. It took him two years just to find the right person to get a message through to Dylan.

When he finally did, he learned Dylan was a fan of XM and a subscriber. After growing up listening to those old 50,000-watt radio stations from miles away across the Plains, Dylan had secretly fancied himself as a DJ. Much to XM's delight, he said yes, and they worked out a schedule that wouldn't be too disruptive to Dylan's regular life on the road.

The singer still maintains an aura of mystery. He's not involved in XM's weekly call about the show with a producer. He doesn't record it at one of XM's studios; in fact, Abrams has no idea where Dylan records it.

"They deliver the show to us every week," he said. "It's a big surprise when we open the package and listen to it."