Archbishop Justin - An Evangelical and No Mistake

Get thee hence and read Peter Ould's latest post on the enthronement yesterday of Justin Welby as Archbishop of Canterbury - it is a great review of an amazing service where if one is looking for this man's theology just look at the hymns which he chose for the service. 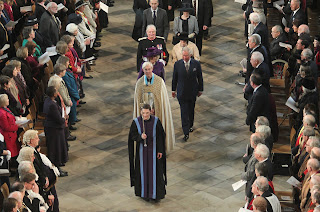 As I watched the installation (enthronement?) of Justin Portal Welby as Primate of all England and Primus inter Pares amongst the leaders of the Anglican Communion, there was a tangible sense that something awesome was happening in front of our eyes.

Just look at the hymn choices. Song after song, even those before the service officially started, were chock full of clear Biblical language. Classic orthodox themes of genuine dying to self and rising in Christ were repeated again and again in the words being sung in the Cathedral. Even the first hymn lay down the form to come.

COME down, O Love divine,
Seek thou this soul of mine,
And visit it with thine own ardour glowing;
O Comforter, draw near,
Within my heart appear,
And kindle it, thy holy flame bestowing.

O let it freely burn,
Till earthly passions turn
To dust and ashes in its heat consuming;
And let thy glorious light
Shine ever on my sight,
And clothe me round, the while my path illuming.

Peter goes through the service, hymn by hymn, including this: 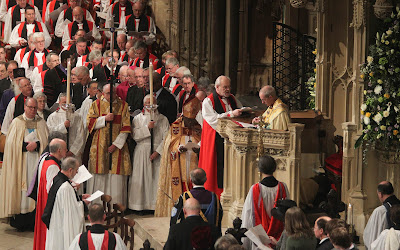 As the procession, Archbishop now attached, moved back down the Nave, the sound of Isaac Watt’s classic hymn “When I Survey” sounded around the ancient walls, significantly with the addition of the often dropped fourth verse re-emphasising the themes of dying to self and the world.

His dying crimson like a robe,
Spreads o’er his body on the Tree;
Then am I dead to all the globe,
And all the globe is dead to me.

Were the whole realm of nature mine,
That were a present far too small;
Love so amazing, so divine,
Demands my soul, my life, my all.

And if that is not enough, then there's this (though I had earlier missed that it was indeed a Wesleyan tune): 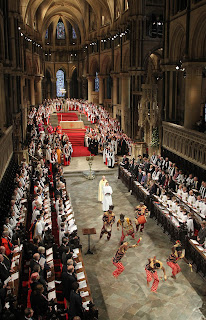 Evangelical hymn followed Evangelical hymn. Procession to the Quire happened as the congregation sang “The Church’s One Foundation” with Samuel Stone’s words and Samuel Wesley’s tune.

THE Church’s one foundation
Is Jesus Christ her Lord;
She is his new creation
By water and the word:
From heaven he came and sought her
To be his holy Bride;
With His own blood he bought her,
And for her life he died.

Elect from every nation,
Yet one o’er all the earth,
Her charter of salvation
One Lord, one faith, one birth;
One holy name she blesses,
Partakes one holy food,
And to one hope she presses
With every grace endued.

And then comes one of my contemporary favorites that spells out the Good News of Jesus Christ.  Peter writes:

On and on it went. The cries of dismay from liberals on twitter when the Cathedral sang “In Christ Alone” were evidence of the way the service was going – clearly and unambiguously returning to the Church of England’s Reformed roots. 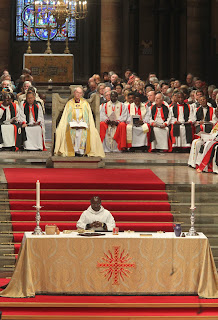 In Christ alone! – who took on flesh,
Fullness of God in helpless babe.
This gift of love and righteousness,
Scorned by the ones He came to save:
Till on that cross as Jesus died,
The wrath of God was satisfied –
For every sin on Him was laid;
Here in the death of Christ I live.

There in the ground His body lay,
Light of the world by darkness slain:
Then bursting forth in glorious day
Up from the grave He rose again!
And as He stands in victory
Sin’s curse has lost its grip on me,
For I am His and He is mine –
Bought with the precious blood of Christ.

“The wrath of God.” “Satisfied.” “Bought” with Jesus’ blood. The words echoed around the Norman pillars, carried down the fibre-optic cables and thundered into living rooms and media operation centres up and down the country and across the world. Powerful words of a powerful Penal Substitution. 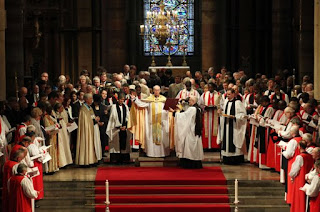 And then the sermon. Oh what a sermon. If ever there was a moment to read the sub-text this was it. Beautifully crafted words that alluded to powerful messages from Scripture and left you to read on where the Word of God had been referred to and connect the dots of the simple picture Archbishop Justin was painting for us through his choices for this service.

Today we may properly differ on the degrees of state and private responsibility in a healthy society.  But if we sever our roots in Christ we abandon the stability which enables good decision making. There can be no final justice, or security, or love, or hope in our society if it is not finally based on rootedness in Christ. Jesus calls to us over the wind and storms, heed his words and we will have the courage to build society in stability.


What is “justice” if we don’t know Jesus? What is love if we have not surrendered to Jesus?

For nearly two thousand years the Church has sought, often failing, to recognise in its way of being that Jesus is the Son of God. The wind and waves divided Jesus from the disciples. Peter ventures out in fear and trembling (as you may imagine I relate to him at this point). Jesus reconciles Peter to Himself and makes the possibility for all the disciples to find peace. All the life of our diverse churches finds renewal and unitywhen we are reconciled afresh to God and so are able to reconcile others. A Christ-heeding life changes the church and a Christ-heeding church changes the world: St Benedict set out to create a school for prayer, and incidentally created a monastic order that saved European civilisation.

Oh yes, ++Justin is well up for reconciliation, but the primary reconciliation he points out must be the sinner to a holy God, the rebel to the Divine one he/she has attempted to supplant. If we wish to be agents of change in the world we must be ones whose whole world has been changed by Jesus. What’s more, real genuine change does not look like the world around it but rather is so often despised by the society within which it incarnates.

The more the Church is authentically heeding Jesus’ call, leaving its securities, speaking and acting clearly and taking risks, the more the Church suffers. Thomas Cranmer faced death with Christ-given courage, leaving a legacy of worship, of holding to the truth of the gospel, on which we still draw. I look at the Anglican leaders here and remember that in many cases round the world their people are scattered to the four winds or driven underground:  by persecution, by storms of all sorts, even by cultural change.  Many Christians are martyred now as in the past.


And as the service comes to close and I was somewhat storming in my boots wondering how all this could be happening with a Wesleyan hymn, well - here's Peter's take:

How to end such a litany of orthodoxy? What else but the hymn of the man ejected from the Church of England for daring to simply preach the truth. John Wesley’s magnificent testimonial was the backdrop for the return of the newly enthroned Metropolitan Archbishop to the Nave altar and the vast body of his people.

AND can it be that I should gain
An interest in the Saviour’s blood?
Died he for me, who caused his pain?
For me, who him to death pursued?
Amazing love! How can it be
That thou, my God, shouldst die for me?
…
Long my imprisoned spirit lay,
Fast bound in sin and nature’s night;
Thine eye diffused a quickening ray -
I woke, the dungeon flamed with light,
My chains fell off, my heart was free,
I rose, went forth, and followed thee.
No condemnation now I dread;
Jesus, and all in him, is mine!
Alive in him, my living head,
And clothed in righteousness divine,
Bold I approach th’eternal throne,
And claim the crown, through Christ, my own.

So get thee hence and read it all here.

bb you and Peter read it as I do. When I return to my computer I will write a reflection, but for now one of my most memorable moments was sitting on the same row with my mentor Sandy Millar, who also mentored ++Justin, and watching Sandy watch Justin as he approached St Augustine's throne. I'll never forget that moment nor that look of tenderness and spiritual intensity. There is an extraordinary legacy unfolding before our very eyes.

The musical selection felt like Truro, though the sermon was much better!

That is awesome! What a marvelous moment for you and Sandy and an illustration of why this is the time right now to pray for ++Justin and his family as they begin this new chapter in their lives, for the glory of God.