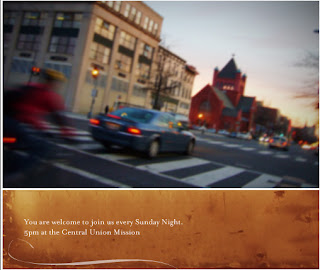 To better serve the city and it's people in crisis, Central Union Mission plans to relocate to the former Gales School which it is all ready renovating for the move. You can read more about that here.

That the Bishop of Washington - with the backing of his allies - would seek to destroy this model for mission in the city is one thing.

The lawsuit appears to be against the District of Columbia, charging them with supporting a religious institution by donating the Gales property to the Central Union Mission.

I wonder what Anglican Curmudgeon thinks of this.

Wow, this just left me gobsmacked! I nearly blew out my frontal lobes trying to get my brain around the idea of an alleged shepherd of the church taking a stand like this. I'm not the bishop's judge, but it would almost appear that the august bishop has been given over to a reprobate mind.

May the Lord deal mercifully with him.

Well, I haven't heard of any CANA parishes in the Diocese of Washington that Chane can sue. He has to sue someone. It would be horribly unfashionable not to.

Check out the link to the Mission's home page - they are a daughter of The Falls Church-Anglican, a CANA Parish.

Chane couches his opposition in his stated zeal for the separation of church and state, but his real reason for getting involved is his hatred for those who reject his lies.

Is this hatred is so deep that he would rather see a successful effort to help the homeless threatened than allow the success of a Christian group he opposes?

I guess the MDG's only extend to those who Chane believes can be swayed to his heresies.

Uhh, let's see...doesn't his cathedral have a Congressional charter? Wasn't is designated as a 'national house of prayer' to be managed by the Protestant Episcopal Church? Hasn't his church given shelter to all sorts of congregations in need , even non-Christian?

Sure it has a Congressional charter. And of course, they have sheltered their inferiors from time to time. But this is something being done by the competition. On his turf. In his territory.

Does anyone know if teh Nat Cat has hosted a production of West Side Story? Has Bishop Chane been heard humming the 'Jet Song'?

Well this is certainly a disgrace. I expect his grace, Bishop Chane, has not attended any of the functions at the mission.

In years past I was also involved in Alpha presentations, in retreats and talks at the mission through one of our earliest members here. Indeed, it's a source of great pride that at the very first worship service of Church of the Spirit, held at my house in the late 90's, we had each person present sign in, and that included one visitor from the Mission who came out with a couple who were hosting him for the day. His signature is up on the wall at Church and whenever I see it I remember how the church is supposed to be about reaching out to all people.

And now, each time I think the Episcopal Church could not possibly sink any lower, I am proven wrong.

(sorry, just had to go there)

Not life, but death.

Ah, but he has a big, fancy building from which to inflict garbage on the world.

"The Episcopal Church Sues You" ... amazing.

That is precisely what it says on one of the cards I flip ... on my soon-to-be-YouTubed Dylanesque music video: Subcutaneous Sinsick Blues.

I am having trouble with the video resolution, else it would already be posted. Let me know if you want to see a super-sekrit advance copy of the song/video.

BB - I really like reading your stuff, but I find it extremely difficult and tiring for my eyes, which are a few yrs older than yours, to try to read small white type on a black background. Is there anything you can do to help some of us fogies w/ the stewardship of our eyes? Sustainability and all that.... Can you set the font larger (or is there a way I can?), or change the color scheme?


I hope Chane didn't mind our little ordination service on my birthday or any other episcopal acts he has no power ...

I hear you - I choose the black for obvious reasons and for the ambiance but I am trying to come out of my "black" period (I tend to wear black as well, it's rather Sylvia Plathish, sorry). I am preparing to make a change soon. But I need to be well rested and ready before I do it. So stay tuned .... We'll try to give you plenty of warning. ;-)

VALLEY FORGE CHRISTIAN COLLEGE v. AMERICANS UNITED FOR SEPARATION
OF CHURCH AND STATE, INC., ET AL.
CERTIORARI TO THE UNITED STATES COURT OF APPEALS FOR THE THIRD CIRCUIT
No. 80-327.

Pursuant to its authority under the Property Clause, Congress enacted the Federal Property and Administrative Services Act of 1949 to provide an economical and efficient system for the disposal of surplus Federal Government property. Under the statute, property that has outlived its usefulness to the Government is declared "surplus" and may be transferred to private or other public entities. The Act authorizes the Secretary of Health, Education, and Welfare (HEW) (now the Secretary of Education) to assume responsibility for disposing of surplus real property for educational use, and he may sell such property to nonprofit, tax-exempt educational institutions for consideration that takes into account any benefit which has accrued or may accrue to the United States from the transferee's use of the property. Property formerly used as a military hospital was declared to be "surplus property" under the Act and was conveyed by the Department of HEW to petitioner church-related college. The appraised value of the property, $577,500, was discounted by the Secretary of HEW's computation of a 100% public benefit allowance, thus permitting petitioner to acquire the property without making any financial payment. Respondents, an organization dedicated to the separation of church and State and several of its employees, brought suit in Federal District Court, challenging the conveyance on the ground that it violated the Establishment Clause of the First Amendment, and alleging that each member of respondent organization "would be deprived of the fair and constitutional use of his (her) tax dollars." The District Court dismissed the complaint on the ground that respondents lacked standing to sue as taxpayers under Flast v. Cohen, 392 U.S. 83 , and failed to allege any actual injury beyond a generalized grievance common to all taxpayers. The Court of Appeals reversed, holding that although respondents lacked standing as taxpayers to challenge the conveyance, they had standing merely as "citizens," claiming "`injury in fact' to their shared individuated right to a government that `shall make no law respecting the establishment of religion,'" which standing was sufficient to satisfy the "case or controversy" requirement of Art. III. [454 U.S. 464, 465]

Respondents do not have standing, either in their capacity as taxpayers or as citizens, to challenge the conveyance in question. Pp. 471-490.

(a) The exercise of judicial power under Art. III is restricted to litigants who can show "injury in fact" resulting from the action that they seek to have the court adjudicate. Pp. 471-476.

(b) Respondents are without standing to sue as taxpayers, because the source of their complaint is not a congressional action but a decision by HEW to transfer a parcel of federal property and because the conveyance in question was not an exercise of Congress' authority conferred by the Taxing and Spending Clause but by the Property Clause. Cf. Flast v. Cohen, supra. Pp. 476-482.

(c) Nor have respondents sufficiently alleged any other basis for standing to bring suit. Although they claim that the Constitution has been violated, they claim nothing else. They fail to identify any personal injury suffered as a consequence of the alleged constitutional error, other than the psychological consequence presumably produced by observation of conduct with which one disagrees. That is not injury sufficient to confer standing under Art. III. While respondents are firmly committed to the constitutional principle of separation of church and State, standing is not measured by the intensity of the litigant's interest or the fervor of his advocacy. Pp. 482-487.

In the previous two comments, I put up a case from SCUS which to my mind suggests that he has no standing at all.

I forgot to add:

All the instructors of this college must be a member of the Assemblies of God. Daily Assemblies of God Chapel is required. So I do not think even those homeless peoples claim will have much standing.

traditionalanglican: Interesting your posts, as my first reaction was to wonder what was the "good" bishop's standing. I hope the courts throw it out quickly...but in DC, you never know.

I suspect other than pettiness, the real reason for this suit is simply to punish the already lawsuit stretched CANA congregations in Virginia...and to threaten other potentially wayward orthodox parishes everywhere.

I am trying to come out of my "black" period (I tend to wear black as well, it's rather Sylvia Plathish, sorry).

Quoting in French looks classy and intellectual when you get the quote right, BB.

Does anyone know if the bishop is attending the Iftar for Ahmadinejad in New York on Thursday? He is such a foreign policy afficianado. I'll never forget hearing him tell the International Relations Committee at General Convention that he knew without a doubt that there was no forced abortion in China. He had dinner at the Chinese Ambassador's house, and he assured him of this. And of course, two years ago he hosted the previous president of Iran, Khatami, at National Cathedral. Could that be considered mixing church and state?

As someone who worked with the homeless in DC on the Grate Patrol for over ten years, and even applied for (and received!) a small grant from the Diocese of Washington under Bishop Haines for our work with the street people, I find this absolutely appalling.

Here is the Subcutaneous Sinsick Blues music video, which I mentioned in an earlier commment.

RE: "Quoting in French looks classy and intellectual when you get the quote right, BB."

But fortunately for BB, unless one is in the classroom and the duly recognized teacher, correcting others' French quotes is always classless and tasteless.

I thought ending with served was the joke. The well known quote is using the metaphor of serving food, but by leaving off the last word, it suggests being served with a lawsuit.

Thanks for your great information. We all appreciate your
information. Keep posting these kind of nice blogs.
Northern Beaches Conveyancing